Earlier I had mentioned that the plywood projection that holds the table was rotten.  I looked like water had saturated it repeated over the years, and the plywood had expanded and de-laminated. 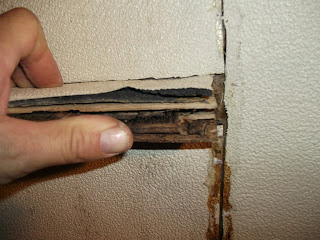 The rotten stuff had to be cut out without cutting away the fiberglass layer that bonded the wood to the wall of the trailer. 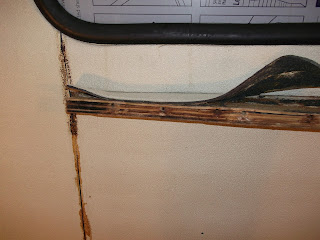 The rot was primarily on the extreme left and right ends, and the middle of the plywood deck was still in good shape.  Using a jigsaw, I made cuts from the front edge to as near to the back wall as I could safely get.  Then I chiseled away the rotten wood, leaving the top and bottom layers of fiberglass. 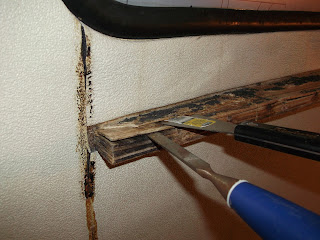 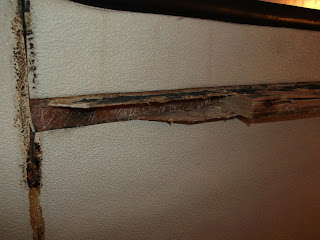 I then cut away an inch-wide strip from the front of the plywood deck -- I wanted some solid wood in its place for the mounting screws to grab. 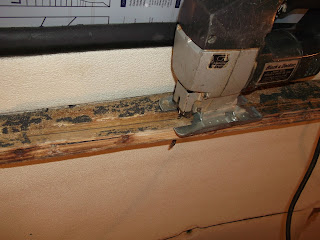 Next, I cut pieces of new wood to fit exactly in the end sections, and also the new facing strip.  These I epoxied into place, screwing and clamping wherever I could.  Here is what it looked like once the clamps were removed: 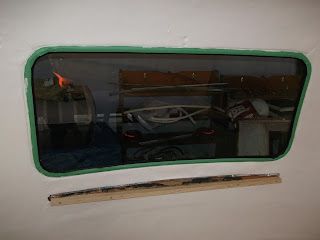 As I write this, I can't find any photos of the finished deck, so I'll have to add some later.  The original deck had been covered with Ensolite, but I didn't have any decent scraps of it to use.  So I used the same Formica that I used to re-surface the table.  It looks good.
Posted by Big East Boler at 19:55