I removed the two jalousie windows.  They came out without too much trouble; the trickiest part was dealing with the rivets that still had a bit of the driver pin stuck inside, as I had described in the last post.  First I drilled out the rivets that held the inside aluminum trim in place.  Then I removed the black plastic trim strip that covered all four sides of the exterior window frame.
After drilling out the rivets holding the frame to the fiberglass body, I peeled off all the silicone caulking that someone had chosen to use to seal it all up. (Silicone isn't a good choice for this kind of application.  I agree with Kevin Johnston, who has produced an excellent collection of videos on his Boler restorations, that silicone is to be avoided.  I watched this video of his before I did my work:   http://www.youtube.com/watch?v=yhpKna85vY8 )  Unlike Kevin Johnston's 13-foot Boler, I had no screws to remove -- just rivets.  Having removed both jalousie windows, I now have quite some work ahead of me cleaning all the remaining butyl caulking, repairing the crank mechanism, and replacing the rubber gaskets which surround each individual glass pane.  I will see if the instructions on repairing the window crank, found at http://bolerlife.com/crank.html , work out.  But I'm unsure about sources for this kind of window gasket.
Removing the tiny window in the door was easy, too.  There were aluminum trim strips fastened to the inside with rivets.  The rivets holding the window frame to the door were hidden beneath the flexible rubber gasket. 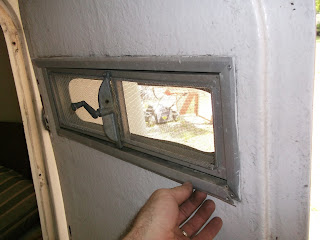 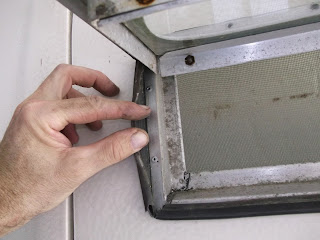 Now that these components have been removed, I'll do some research about the best ways to clean and polish them.  It would be nice if I could achieve a bright shine and then treat them with something that would preserve the shine.  Even though the original door window is only 6 inches tall and doesn't let as much light in as the larger windows found in 1980s Bolers, I think it looks cool.
Removing the door was no big deal.  The nuts on the hinge bolts had rusted and so I had to cut them with the grinder.  I'll have to determine if they'll just need a "door hinge repair kit" from Paul Neumeister, or if I should buy complete replacements from Scamp.  Somewhere on the 'net I saw that someone had managed to give their hinges a really good polish.