Preparing for the paint shop

The last jobs to do before painting included removing the belly band and lights, and cleaning off the residues from adhesives and sealants.  There was that highly decorative and endlessly informative Certified Recreational Vehicle sticker to be removed, and the manufacturer's sticker too.  The butyl caulking that had been used for the windows and roof vent cleaned up easily, but someone had gone nuts with silicone and it required a little more effort.  I used varsol for some spots and "Goo-gone" for others.  I had been advised to use lacquer thinner instead of varsol because varsol leaves behind an oily residue.  I didn't have any thinner, so I used the oily stuff and then scrubbed it with detergent.
I hadn't yet fastened the body to the frame, so that was the very last thing. I used 1/4" by 2" carriage bolts, with lock washers and lock nuts.
I wanted to draw the front right corner inwards in order to correct a door gap issue that I noticed when I bought the trailer.
It's an issue that a guy in Nova Scotia pointed out in a YouTube video (Riverport Rovers).  The body often lets go from the frame just ahead of the door.  On mine, I noticed that the top of the door opening was 26 inches wide, and it was about 27 1/4" wide at the bottom.  Here's what I did to correct it.  First, I fastened the floor to the frame just on the curbside rear part.  Then I used some lumber and a couple of bar clamps to pull the front curbside toward the rear, narrowing the gap. When I was satisfied that the gap was within reasonable limits, I bolted everything else down, making sure that the body was centred on the frame at the front. 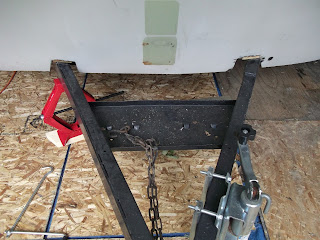 I don't think the floor was cut exactly to fit the frame right from the beginning.  The old plywood was not flush with the front toe-kick part of the frame.
-- even though the plywood and frame lined up well in other places. 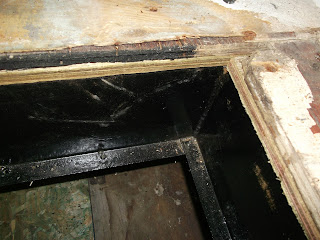 Anyway, the floor got bolted down.  I used 19 bolts in total -- more than were used originally.  The new plywood should give some extra strength, too.

And now, the trailer is ready for the paint shop! 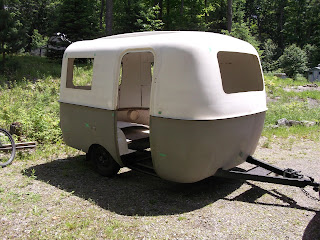 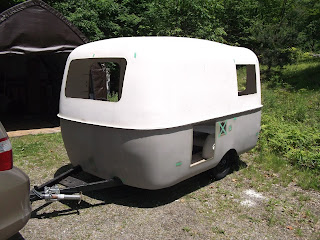 I used masking tape to mark the spots to be filled with Bondo or fiberglass. I want to leave a lot of the rivet holes open so that I can line up the cupboards properly when I reinstall them.
I chose my two paint colours using Benjamin Moore paint colour chips.  The top will be "Bavarian Cream", and the bottom will be "Eucalyptus Leaf".  The body shop guy kind of laughed at me and warned me that the automotive paint might not appear exactly like the paint chips.  I told him I'd be fine with anything that's close.  We'll see in a few days.