Getting to the Welding 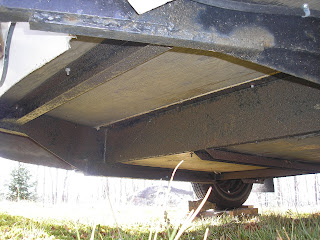 My old frame is at a professional welding shop.  Last week I loaded it onto my utility trailer and took it to a few local people to get opinions and price estimates.  The consensus was that the old frame was still pretty strong, and should be just fine for another 40 years if a couple of reinforcements are made.  One of the people I consulted manufactures and line of utility trailers, and he said he could make a new frame possibly for around a thousand dollars.  I was tempted to go that route -- some of the patches made to the tongue of the old frame weren't done very neatly, and the clean lines of a new steel frame would be really nice to have.  One concern I had was that the guy didn't think he could achieve the same rounded line of the original's rear bumper.  And there might be some problems with getting an exact fit when putting the trailer body back on. Also, most of the ugly old frame is out of sight once the body is attached. Another concern was that he couldn't guarantee the price before starting the work.  So I chose to go with fixing up the old frame.
I had already bought my new axle from Paul Neumeister earlier in the summer, and I was eager to get started. So I went ahead and got the old frame sandblasted.  Removing the surface rust revealed a couple of minor perforations, and made it easy to see where reinforcements would be needed.  The welder will probably have my frame ready in a couple of days, and then I'll be able to paint it.
I had read other people's renovation postings and seen what kind of paint they chose.  Some used Tremclad and others used POR-15.  All the locals have advised me to use POR-15 and steer clear of Tremclad.  They say it's well worth the high price charged.
In my next posting I should have pictures of the fixed-up frame, before and after painting.
Posted by Big East Boler at 19:05