Separating the frame from the body - phase two

Having removed the three benches, the water tank and the laminate flooring, it was time to unfasten the bolts and screws that held the body to the frame.  A couple of the flat-head #10 Robertson stove bolts came off without a great deal of trouble.  A couple of the plain screws unscrewed easily.  But most had to be cut off from below.  Of those, I cut off with my grinder -- a 4 1/2" Crappy Tire Special.  And some I was able to break off just by clamping on with a ViseGrip and wiggling back and forth.  I did just about all of this work while the trailer was still on the ground, just to maintain stability if I had to apply substantial force.

Next, I had to jack up the body and get some supports underneath it. There were two things to consider in doing this part: the supports couldn't interfere with the frame dropping to the ground and then being pulled out from under the body; and the body had to be supported in such a way that there would be a solid connection from the front deck (below the bunk) and the back deck (below the dinette).  What I ended up doing is temporarily supporting the floor to drop the frame and then making a permanent well-braced structure afterward. 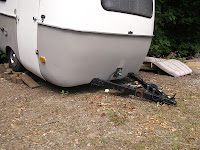 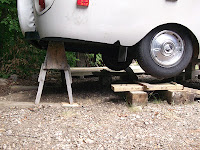 First,  I dropped the tongue to the ground.  Then, I placed a sturdy saw horse beneath the rear, fitting it between the two sides of the frame.
Then I jacked up the front end and placed my temporary blocks below the two front corners. 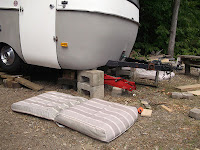 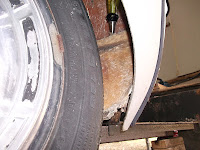 I found that there were some plywood-and-fiberglass inserts inside the wheel wells that had to come off before the frame would release.

These pieces came off easily with a chisel.  The one in this photo is just below the closet floor.  This part gave me a better idea of how they built these early Bolers.  I wonder if the ones with fiberglass floors are much different. 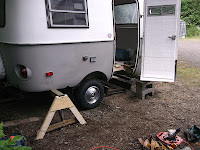 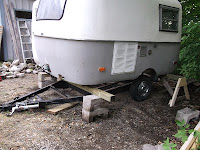 These pictures show the trailer up on its sturdy, long-term supports. At the back I made a saw horse using an eight-foot 4 x 4 and placed it just ahead of the temporary saw horse.  I chose this over resting the 4 x 4 on cinder blocks because I figured the legs would prevent any rocking or tipping.  At the front, the 4 x 4 is resting on blocks.  In both cases, there is enough room for the frame to slide out.  Then, I made a rectangular structure out of 2 x 4's -- like making a stud wall -- to sit roughly where the steel frame would have been.  This took the weight of the plywood floors evenly, and allowed me to keep the bottom "skirt" of the fiberglass walls away from the 4 x 4's. The distance from the plywood floor to the bottom edge of the fiberglass is approximately 3 1/2", so I had to insert some cedar shims between the 4 x 4's and 2 x 4's.  All the while, I tried to ensure that the front and the back were aligned and level. 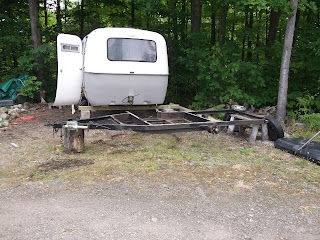 The last stage of the process was to remove the wheels and drag the frame out. Time for a quick inspection to assess its condition.  Not a pretty sight, but stronger overall than I had imagined. 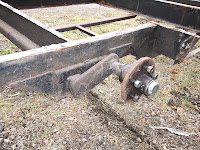 There!  The frame has been separated from the body.  Next: get the new axle and find someone to do the installation for me.