I think my wife did a great job sewing the curtains and the cushions.  Here's the overall look: 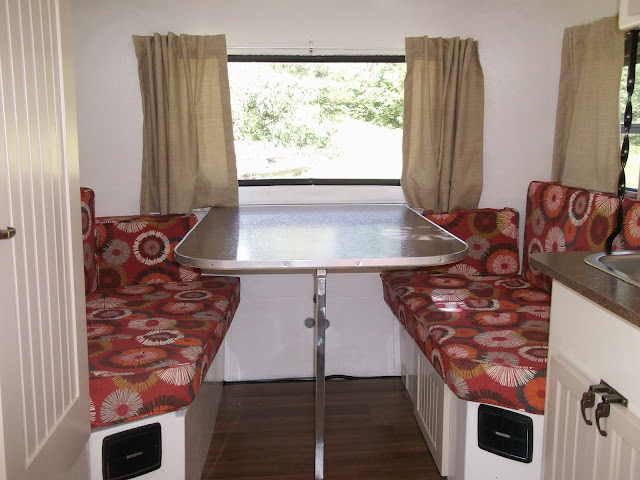 And here are some details about the curtains: 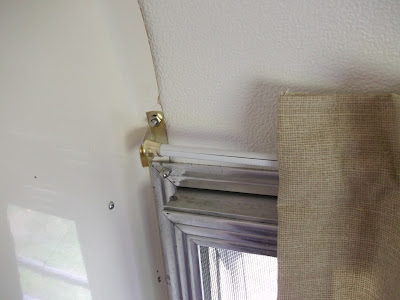 The curtain rod is made by "Levelor", and it's a cafe style rod that clips into a very small brass bracket.  The bracket sits quite close to the wall, so there isn't much of a gap between the aluminum window frame and the top of the curtain.  The bracket is mounted at just about the same height as the originals -- I used the original holes as a reference. 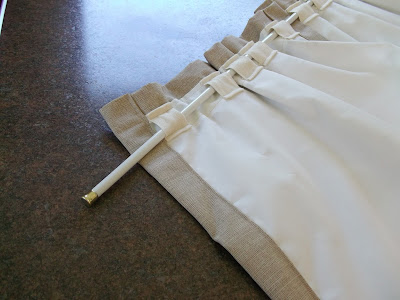 My wife used a heavy woven cotton tape for the hidden tabs.  I'm not sure what that tape is called, but it was in the "bias tape" section of Fabricland.  She allowed about a 1" header.
The curtains are lined with a "satine" curtain lining.  My wife followed instructions that she found on the Internet -- she just Googled "hidden tab curtains." 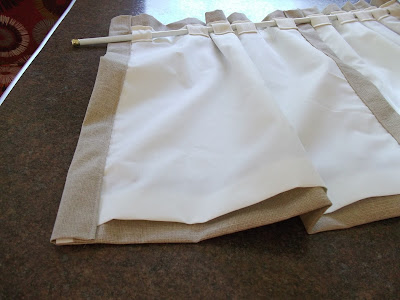 Here are some details about the cushions: 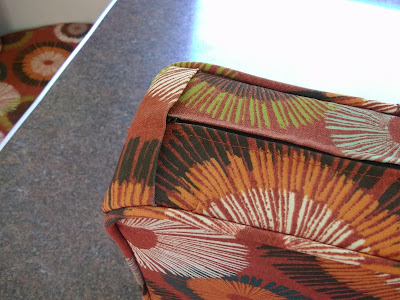 I already posted some notes about sewing the cushions, so I won't go into too many details here.  This photo shows how the "boxing strip" rounds the corner to the zipper end.  Note how the "piping", which is the cord running around the two perimeter edges, defines the shape of the cushion. 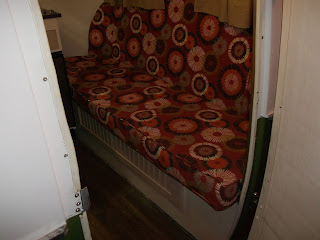 Now, the one big mistake we made with the cushions was to use the same 4" thick foam on the back of the front bench (upper bunk) as we used everywhere else.  Two things happened: it pushed the lower cushion out too far forward, and it prevented the hinged side-ends of the upper bunk from bending as they should when in bench-back position.  I ended up replacing it with 2" foam and then everything fit perfectly.  I'm going to keep the piece of 4" foam in case I find another Boler to rebuild! 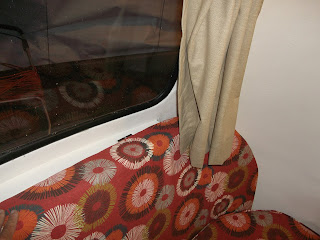 In this photo you can see that the bench-back did not get piping.  In fact, it wasn't sewn at all.  I carefully stretched the fabric to the plywood at the back and stapled it in place, allowing some slack at the side hinges.  Then, on the recommendation of a nice lady at Fabricland, I rolled the edges of the backing fabric over a 1/2" strip of cardboard-tape made specifically for this purpose, and stapled it in place.  It made for a neatly finished edge.  The staples are visible, but barely, and they'd only be seen if someone were lying on the bottom bunk looking up.
Most of all, I really like the fabric we chose.  It's marketed as an outdoor furniture fabric, so it's fairly UV and mildew resistant.  The pattern and the colours really work with the 1972 thing, too.
Posted by Big East Boler at 07:05